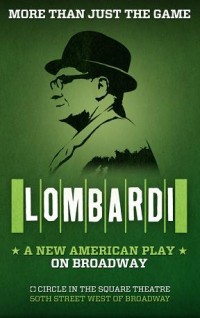 It’s always surprising to folks that I’m able to speak Football.  Not fluent, mind you.  I learned a mid-1970s dialect of NFL when the Cowboys were lead by Roger Staubach, and Sundays meant listening to my father’s uncontrolled screaming at the television.  In semi-peaceful protest, I drew all over my bedroom walls in crayon and then cleverly decided to “wallpaper” over it by gluing notebook paper over it—notebook paper with blue lines, mind you.  I thought my father’s reaction to a Cowboy’s interception was bad until I was on the receiving end of his true fury.  Today’s flashy FOX camera work and graphic can throw me for a loop, but during Super Bowl Sundays I’m able to fumble my way through intelligently.  So, I’ve not been one of those Broadway snobs turning up my nose at Lombardi, a play about the legendary Green Bay Packers coach playing at the Circle in the Square since last October.

It’s taken me awhile to get up the courage to see the play mostly because I have such vivid memories of trying to escape Dad’s unbridled aggression.  But I imagined that Judith Light’s turn as Marie, his devoted and probably alcoholic wife, might add a bit of levity and heart to the proceedings—and I wasn’t disappointed.  The conceit of the show is that a reporter from Look magazine named Michael McCormick (Keith Nobbs) travels to Wisconsin to interview Vince (Dan Lauria) at a particularly touchy moment—the coach has been recently trashed in an Esquire profile (my how things don’t change), and the team is one win away from a conference championship that has eluded them for the past two years.

As a plot device, telling the story through the eyes of the reporter seems clever at first—it allows for a lot of background exposition.  But the moment that Judith Light, well, lights up the stage with an incredibly nuanced and emotionally grounded performance as the supportive yet long suffering wife, I realized that for me the drama shouldn’t be about what’s happening on the field, but about what’s happening between the characters.  Unfortunately, anytime the show got dangerously close to scratching beneath the surface of a male character’s façade, the play backs off.  I wanted much more about the reporter’s tortured past with his father—that would have given me required insight into his character.  Frankly, writers/reporters are never the most appealing character to center a drama around—does anyone really care that he gets his story or not?  To me, the tension needs to be about more than a transaction.  Eventually, the play does get there as the writer must make a choice about the story that threatens his principles, but by then we’re nearing the end of the show, and it feels too late to care.

Throughout the show, it’s left up to Judith/Marie to carry the emotional baggage on stage, and boy does she do it spectacularly well.  The scene where Marie agrees to support Vincent and move to Green Bay for his shot at a head coaching job is heartbreaking—and reason enough to see the show.  Judith, dressed in gorgeous and simple dresses by Paul Tazewell, has worked over this character and inhabits every part of her body.  She moves with a slight stoop, and as she continues to pour high balls and martinis throughout the show, her speech slurs ever so slightly as her feelings unravel.

As Vincent, Dan Lauria, best known as the Dad on “The Wonder Years,” does a passable, and at times, physically ingenious job.  But somehow, his level of screaming never dug down to my core, touching me in that frightened place I experienced as a kid.  I kept thinking that kind of intensity is what would have motivated players, as well as a legion of fans.

Still, the audience sat rapt in attention, and I’m glad this show is pulling sports enthusiasts away from their flat screen TVs to see live drama unfold on stage.  Broadway needs that diversity in order to survive.  The guys around me nodded and gestured knowingly anytime someone rattled off famous names or facts and figures, reminding me that I’ll never quite be fluent in Football.  But I’m glad I know enough to appreciate it—once again marveling at theatre’s ability to transcend language.

This entry was posted in Featured, Tex And The City and tagged dan lauria, judith light, lombardi on broadway, vincent lombardi. Bookmark the permalink.