Since being listed in a couple of media directories, I’ve been inundated with emails from PR people who clearly have no understanding of Poptimistic.  Consider these examples: “8 Tips for Asking a Date to Prom Over Text,” a book titled “Elusive Peace: How Modern Diplomatic Strategies Could Better Resolve World Conflicts,” and from a representative for a nutritionist “5 guaranteed-to-shut-down the witching hour tips or I will come and cook dinner for your family myself.”  Witching hour?  Tip #2 includes dousing all vegetables in ranch dressing.  Hello, nutritionist?  There’s an obesity crisis in America.

So when I received an email from Peter Grubb of ROW Adventures titled “Idaho Adventure Company coming to NYC” I rolled my eyes.  Not really in my specialty area.  But wait.  How did this guy get my personal email that isn’t listed in the media directories?  From the opening line of his email, the guy had clearly done his homework.  He commented specifically on several things of mine he’d read—from blog postings to a recent story in Bon Appétit about Jerusalem (he’d lived there as a kid)—and suggested that there might be a story angle in his whitewater rafting experiences that marry adventure and food.  He definitely got credit for background work, so we made a plan to meet when he was in town a few weeks hence. 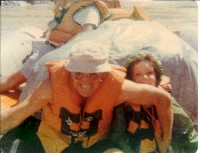 In the interim, I couldn’t stop thinking about my own rafting experience as a kid floating down the Grand Canyon for 7 days with my family.  It was one of the most memorable experiences of my life.  Little things fascinated me like bathing in the river with “magic soap” that was called “biodegradable.”  My mother exhibited super woman strength wrapping her legs around my sister Pam who was headed overboard in one of the most dangerous stretches of rapids.  I was so small that in order to stay safe during rough water, my father had to sit on top of me.  My recent trip to Caneel Bay had unleashed a cavalcade of feelings about family travels, so that by the time I met up with Peter, I had done a 180—gone from suspicion to supporter.

Turns out, Peter is an entrepreneur, starting his company ROW Adventures in 1979 when he was 22, when all he could get was few rafting permits for rivers that no one was really interested in.  But Peter didn’t give up—creating great itineraries, and in the off season, packing up his car with a slide projector and driving up and down the West Coast speaking to anybody who would listen—nature groups, libraries, get togethers hosted by former participants.  And his business took off.  At the same time, Peter has been a forceful advocate for environmental preservation, intimately involved in the creation of 500,000 acres of new wilderness preserves—the first in Idaho in 29 years, signed into law by Obama last March.

Today, he offers excursions down famous rivers like Idaho’s Middle Fork of the Salmon, or the Rogue River, as well trips through Alaska and British Columbia, even international trips to the Galapagos and Croatia.   But the ones that excite me the most are the Whitewater Culinary Series combining adventure with the food and wine of the Pacific Northwest.  Guests learn how to prepare gourmet camp food with hands on learning about Dutch ovens and propane stoves.  If my Dad were alive today, no doubt he’d choose Peter’s Scotch & (white) water—“a scotch tasting trip with the best mixer imaginable—the crystal waters of the Middle Fork of the Salmon River.”  Hmm, what do they say about don’t drink and raft?

When I suggested to Chef we think about a culinary rafting adventure, he looked at me like I’d gone crazy.  But when I explained to him my rafting history, and that it was more like a roller coaster ride, he seemed almost to consider it.  I have a feeling that in this scenario, I’ll end up playing the role of my father—sitting on Chef to keep him safe.   Now that’s a memory that would last a lifetime.