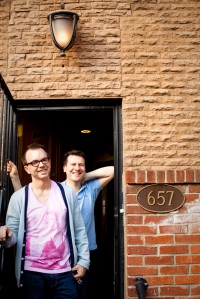 Many people like to joke that Whole Foods=Whole Paycheck.  But in my house, the organic grocer has a more insidious, mind-control affect.  Since Chef works his magic daily at their Upper West Side store, he often comes home with samples of what I consider to be the latest earthy crunchy nonsense—the “raw” breakfast bars with uncooked oats, the pungent and supposedly anti-inflammatory Indian hemp lotion, the “apitherapy” honey organic elderberry syrup that smells like a cough remedy.  So when he marched home in early January with an over sized bag of kale, I was more than a little suspicious.

“Kale has a very high ANDI score I’ll have you know,” he announced defensively.

“Andie MacDowell has a new kale diet?  I’ve always hated her you know,” I teased.

“No, it’s a way of ranking foods based upon their nutrients.  Stands for Aggregate Nutrient Density Index.”

“Rolls right off the tongue, doesn’t it?”

“Well, it’s part of the Health Starts Here eating program we’re promoting.  And I’m going to be trying it out.”

“Oh great, is it one of those John Mackey endorsed crazy diets where you only eat rocks and sticks?”

“Close, there’s no oil really, and it’s pretty much vegan for the first few weeks.”

Chef handed me a small book titled Eat Right America by Joel Fuhrman, M.D..  The doctor’s theory wasn’t necessarily ground-breaking: eat lots of vegetables, fruits, beans and nuts; limit animal products; cut out processed food including sugar, white flour, processed foods.  He gave this style of eating a fancy name—Nutritarian.  Lord, that was hard to say.  These do-gooders needed a better PR person.  Although, I did like the sound of this:

“Here there is no calorie counting, portion-size measuring or weighing involved.  In fact, you will eat as much food as you want, and still over time you will become satisfied with fewer calories.”

But here’s where I started to get suspect:

“Follow the advice in this handbook, and you will lose eight and keep it off—because a properly nourished body will automatically seek its ideal weight, without having to fight the scale or count calories for one more day.”

On the one hand, it did sound a little preachy and cultish.  On the other, what did I have to lose other than weight, hopefully?  It wasn’t like I had to order some crazy disgusting pre-packaged food or starve myself on a cleanse.  Besides, it seemed unfair to make Chef go it alone.  He had been wanting to do something radical to change his diet and lose some unwanted pounds.  I felt like I should make the leap out of love.

“Sure, feels like the supportive thing to do.  It’ll be easier if we do it together.  Besides, I like a challenge.  Vegan for a couple of weeks will at least give me something to blog about.”

For some reason, the thing that always worries me about diets—although Dr. Fuhrman calls this an eating program—is what am I going to have for breakfast?  It’s just a funny thing I get nervous about, probably dating back to when my mother forced me to go on the Scarsdale Diet when I was 11 and could only eat bitter grapefruit and dry toast every morning for two weeks.  Luckily, the handbook had a couple of morning recipes that have become my go-to favorites—one of them shared below.

Surprisingly, the fortnight of veganism was pretty easy, making it a cinch to ease out a significant amount of animal protein in my on-going eating plan.  At the same time, I did start to crave high nutrient food like Dr. Fuhrman predicts.  Apples, a fruit I’ve never much cared for, now taste so good to me that I devour them to the core after every workout.  Even better, over the course of the month both of us have lost about 10 pounds.  Maybe my body is finding its natural weight.  I’ve never been hungry and can’t remember the last time I looked this trim and lean, or felt so good, especially about the choice to be supportive of my partner.

I guess sticks and stones may break my bones, but they sure can taste healthy. 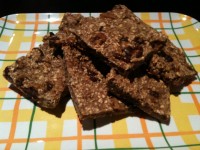 Preheat oven to 350 degrees.  Smash the bananas in the bottom of a bowl with a fork, then mix in all other ingredients.  I use my hands for ease.  Press “dough” in a 9”x9” baking pan and bake for 30 minutes.  Cool then slice into squares.

Notes: you can find date sugar near other sugar at Whole Foods Markets; I often throw in other nuts like cashews into the mixture; and sometimes I forget the coconut and it tastes fine—so if you’re picky about the white stuff, leave it out!