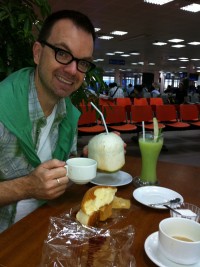 When I secretly began packing little yellow pills to help me survive my early morning travels, I realized I had a problem.  Without this proper preparation, pre-dawn wake-up calls could go bad very quickly—headaches, grumpiness, inability to function.  Unfortunately, Chef had experienced it all—he’d seen the look of sheer panic on my face when I realized I would not be able to get a pot of coffee before leaving for the airport.  Sometimes, the night before departure, I’d dash from the hotel to a nearby Starbucks or order room service coffee, just so I could have cold java waiting for me in the AM.  In a pinch, though, those caffeine pills could ease the withdrawal symptoms.  Oh, yes, my caffeine addiction was just that bad.  And it all started when I was six.

On family trips to the Grand Hotel near Mobile, Alabama, I awoke at dawn with my father and escorted him to breakfast.  Because we were on vacation, he’d allow me my own cups of the black goodness.  I felt so grown up and special—like I was more sophisticated than all the other kids.  My poor mother was left to deal with a seriously wired kid the rest of the day.  By my teens, what began as a treat, turned into an every day affair.  Still, sharing in the coffee ritual was a bonding moment with Dad.  I’d accompany him to special coffee bean roasters in Dallas’ gay neighborhood (naturally) where he’d load up on special blends.  On Sundays, we’d go through pots of coffee and heaps of cheese toast reading newspapers and magazines together.  Coffee was a source of comfort and togetherness.  I never once thought about overindulgence or health issues.

Diet Coke on the go in Rio

Moving to New York just ramped up my reliance on caffeine.  It was hard to escape a good and necessary cup o’ joe.  A pot in the morning followed by frequent Starbucks runs for skim lattes was the only way I made it through the day.  Don’t get me started on the gallons of Diet Coke.  It wasn’t until I started living with Chef that I realized not everyone consumed as much coffee—and caffeine—as me.  Indeed, I thought it immensely odd that Chef started his day with just a glass of orange juice; he could care less for coffee.

But as I’ve gotten older, pushing (just barely) past the 40-year threshold, I’ve started paying more attention to my health—weight, eating habits.  Watching my father’s decline and death from diseases related to poor health, ramped up the pressure (and obsession) to take care of myself.  People keep telling me we look so much alike, which I know is supposed to be flattering—he was a very athletic and handsome guy at 40.  But at the same time, I witnessed his rapid descent and early death brought on by a combination of poor diet, pill popping and alcohol abuse.  I wanted to break the cycle, and not ignore my health like he did.

For years, I was one of those people who said, “Coffee is my only vice.”  And scoffed at the idea that it was addictive.  Then slowly, I’d laugh off my reliance as quirky and funny, shrugging, “We’re all in the same boat.”  But when I realized that I couldn’t function and was going to great lengths to feed my body caffeine, I decided to change things.  What scare me most was the horror stories of caffeine withdrawal 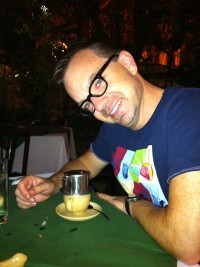 As I began reading up on caffeine addiction, I was determined to make the change slowly.  Some people go cold turkey and that’s where symptoms like debilitating headaches and vomiting set in.  In fact, true caffeine addicts like myself go through withdrawal every day—we feed our bodies full of caffeine regularly just to get through the day (a vicious cycle, really) and then while we’re asleep our bodies crave the stuff.  By the time we wake up—often not sleeping well through the night because of our caffeine cravings—withdrawal starts to set in.  Thus, the morning headaches I would have without the proper amount of coffee.  The common refrain, “I just can’t get going without coffee?”  That’s addiction.

And so, motivated by the same eating regimen that had me going vegan for two weeks, I decided to slowly but surely replace scoops of my caffeinated blend with decaf.  Each week, bit by bit, I eased down my caffeine intake.  While the withdrawal wasn’t horrible—a few mild headaches—I definitely felt lethargic each Monday and Tuesday as my body adjusted to just a bit less of the java electricity.  I just kept telling myself this was a good change that I could make it to the other side.  Heavy praise from Chef also kept me on track.

At the same time, I was sleeping better and sounder.  Whereas my body would almost always jolt awake at 5:30am for what I now realize was a caffeine fix, I was suddenly sleeping through to 6, then 6:30, then 7.  All those studies that say we need between 7 and 8 hours of sleep?  I was now getting that many winks.

Granted, even decaf has caffeine, but not nearly as much, and I’m controlling consumption to 2 cups a day.  One positive outcome of the recession belt tightening was abstinence from Starbucks, so I generally only have to deal with what I brew in-house.

Last week was my first solely decaf days, and I have to say, I’m incredibly proud of myself.  Granted, it’s not an addiction to alcohol or drugs, but it was still a monumental challenge for me.  One that it would have been all too easy to ignore.

As I’m packing for our trip this week to St. Lucia, one thing just came out of the travel kit—those little yellow pills.  Not relying on that kind of friend anymore.