Like Oprah, Jon Paul’s life has grown from a single TV show into an entire network.  Thanks to the success of Alphabet City, his award-winning humorous book and blog about a sitcom life, Jon Paul has crafted a new online network called Poptimisitic.  With that charming gay Mary Tyler Moore spirit viewer-fans have come to know and love, Poptimistic has even more room to explore a fun, fresh, frank approach to life including coverage of travel, food, technology, culture and relationships.

For more information, and to inquire about advertising or sponsorship opportunities, send an email. 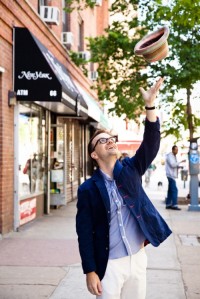 Jon Paul Buchmeyer calls himself a writer-preneur which he described to national publication EDGE as “someone who combines artistry with business acumen. Someone who explores all methods of connecting with readers—blogging, books, twittering—and then working creatively with companies interested in connecting with those fans.”  In addition to contributing to Bon Appétit and Condé Nast Traveler, he is the author of the award-winning humorous memoir Alphabet City: My So-Called Sitcom Life. Named a finalist for the 2010 Next Generation Indie Book Award, the fast-paced book is about life as a gay Mary Tyler Moore working as a publicist for Tyra, Whoopi and glam magazine giant Condé Nast.  Praise for the memoir includes influential blog Boy Culture saying it has “a snappy writing style that mimics a fun BFF.”  As noted in The New York Times, Jon Paul secured sponsorship from Kimpton Hotels & Restaurants for Alphabet City’s 20-city book tour, with regional support from Whole Foods Markets, JetBlue, Chevy, Hyundai and Subaru—integrating those brands into blog content.  He also writes a regular travel column for GayWeddings.com, the leading online information source for gay and lesbian couples.