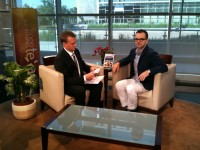 BOOK Tour/Midtown Chic-a, May 13, 2010.  MIA Gets a Dose of Insider Celebrity Scoop from Acclaimed Author/Blogger.

BOOK Q&A/EDGE: His Life As a Sit-Com May 12, 2010. Excerpt: “Buchmeyer’s uproarious and dishy account of his Big Apple rebirth.” Plus a great Q&A.

BOOK Review/52Books, May 14, 2010: “Genuinely funny, as only someone who has seen the best and the worst of the city can portray.”

BOOK Review/Gay List Daily: BYOLT: Bring Your Own Laugh Track, May 13, 2010.  “It ends with a chapter billed as the ‘series final,’ which saddens us, because we’re sure there’s more to this guy’s zany gay adventures.”

BOOK PRESS/PageSix: Teddy Terror, New York Post PageSix, February 28, 2010. Most the most important gossip column around gives me another break!

A Writer and Chef’s Brownstone in Washington Heights, FromMe-ToYou, April 14, 2010.  Photographer Jamie of FromMe-ToYou.Tumblr.com turns our home into a work of art.

Fashion VIPs TX: NY, Brilliant, March 2005.  This crazy Lone Star state magazine’s tagline is “Texas Style & Substance,” but this feature on Texas transplants living in the Big Apple seems like neither.  How did Frida and I end up in it?  And my name spelled wrong…but I LOVE the photo!

PR Pros Start Up Communications & Management Company, BizBash, January 22, 2008.  The picture accompanying this story about me and Susan starting our own company inspired us to join Weight Watchers.

Join the Cooking Club! WABC 7 News, June 20, 2008.  Our Tuesday night dinner supporting our local CSA gets a little airtime thanks to Susan’s efforts on behalf of Bon Appétit.  I don’t think the video clip works any longer, but you can read the story.

In the Heights: Vitality & Diversity at Manhattan’s Tip, Gotham Gazette, June 23, 2008.  On my 3rd trip to see the musical that made the ‘hood famous, we bumped into a reporter who wanted to see if the area was really like the show.  Next thing I know, she’s at my Easter table!

Tony Landslide: ‘Cry Baby’ By 1, Michael Reidel’s column in the New York Post, May 16, 2008.  You know you’re a theatre queen when you show up as a bold-faced name in Michael’s column!

Accounts of Note, New York Times, October 1, 2007.  A little note about the opening of Tentpole NY!