Ever since I fell in love with the sassy puppets along Avenue Q, all it takes is the whisper that a furry hand sock might make an appearance in a show for me to get over my reservations about a production and reserve a seat.  And so it was with the musical F#%king Up Everything with music, lyrics and book by David Eric Davis with Sam Forman as an additional book writer, currently running at the Elektra Theatre in New York’s Times Scare. And yes, that last part about Times Scare is not a misprint, as the promotional material describes it, “a unique and vibrant entertainment destination…state of the art haunted house…enhanced with elegant macabre décor.”  Oh, and it has a theater, too.  Sound odd?  It is.  And quite an unfortunate setting for a musical that wants to transport us to the dive bar performance world of Brooklyn.

But, I was willing to let all that nonsense slip away the moment Max Crumm playing the 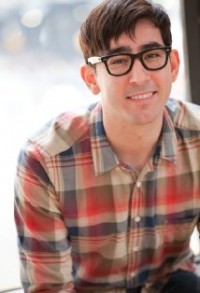 nerdy puppeteer Christian cracked his first awkward self-aware hipster joke.  Jesse Eisenberg better watch out, because Crumm is playing an irascible send up of the face of the Facebook generation that’s both hilarious and heartwarming. Truthfully, I was worried at the top of the show when Christian mentions being a puppet master for kids who works out his issues using a cast of inappropriate puppet stand-ins like Noam Chomsky.  Worried because we better see these puppets, and even more worried that a nearly a third of the way through we still hadn’t seen them.  With that build up, I was sure to be disappointed when they finally popped up.  Whew, no.  When we got puppets (designed by David Valentine), they weren’t just any puppets.   We got a whole series of ‘80s pop-stars including a dueling Robert Smith (The Cure) and Iggy Pop, and later the one-armed Rick Allen of Def Leppard.

The plot’s none too complicated. Hipster puppet boy wants beautiful ukelele playing girl.  Hipster puppet boy’s wannabe rockstar boyhood friend wants to nail her too (lovely).  Hipster puppet boy’s best girl friend harbors a love for that rockstar best friend but is trapped in a hopeless relationship with a stoner boyfriend.  And unfortunately, none of those characters achieve the same level of depth and watchability as Crumm’s Christian.  Except for Lisa Birnbaum’s turn as Airelle, an influential club booking agent.  When she shows up nearly half way into the show, her introduction feels like a shoe-horned plot device to give us a maybe too clever song Fuck-It List, but Birnbaum overcomes it with comic timing, physicality and singing that charmed the snark right out of me.

It’s not hard to see why David Eric Davis has garnered some acclaim for the show’s music and lyrics since it was staged at the New York Musical Theater Festival in 2009.  Something I Like About You makes Christian’s love for Juliana seem sweet and charming, and the song could be taught in lyrics classes as a great list song that advances character and plot.  Awkward Silence cleverly fills the void of the lack of interesting character details for the rockstar Jake and the unknown love Ivy.  While Take Me As I Am delivers the toe-tapping uplifting number we needed for Christian.

Ultimately, the book doesn’t give us much of a reason to care for any of the cardboard characters presented.  Leaving me wishing for more puppets, and just one more bit of Crumm.

For more info and tickets: F#%king Up Everything

This entry was posted in Featured, Tex And The City and tagged max crumm, puppets, theater. Bookmark the permalink.