Episode 2: Thank You For Eating

Coming Up: Jon Paul releases an excerpt from Episode 2—will he cave to the demands of a food industry giant and work on convincing Americans that chips are healthy? 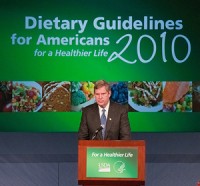 “Enjoy your food, eat less,” was the oh-so-helpful advice issued by the U.S. government this past Monday in their updated nutrition guidelines for an incredibly obese America.  As crazy as it sounds, pundits are calling that advice “groundbreaking.”   The New York Times noted in their coverage, “While the recommendations may seem obvious, it is nonetheless considered major progress for federal regulators, who have long skirted the issue, wary of the powerful food lobby.”  Boy, you can say that again.  I got up close and personal with the food industry when I left Condé Nast Traveler and went to work for a top 10 global public relations firm, and quickly got caught up in promoting chips and soda.  Oh, they’re crafty those food conglomerates popping up to affect the agenda when you’re not paying attention.  Case in point: PepsiCo’s “hosting” of this New York Social Media Week talk: “Social Media and Nutrition Advocacy: How Governmental Guidelines Spur Online Conversations.”

Here then is an excerpt from 40, Love that takes you behind the scenes of a global food giant when the government last revised the food pyramid.  Be afraid.  Be very afraid.

excerpt from
Episode 2: Thank You For Eating
Dazzled by dollar figures, Jon Paul tries his hand at the publicity big leagues.  But after a near catastrophe with an aging supermodel, he must make chips and soda seem healthy.  Guest stars: Christie Brinkley, Laura Linney.

For every innovative Absolut program, there was double the number of frustrating projects from outrageously demanding clients.  Unfortunately for me, companies that were willing to spend the big bucks got access to the agency’s most senior staff.  It was a matter of economics, not talent, really.  Like lawyers, we billed on an hourly rate—the more experienced, the more money.  As one of the senior people in the consumer products division, my going rate was extraordinarily high, somewhere around $300 per hour.  What that meant for me was that the clients I enjoyed working on—the ones I was hired to bring in like hotels and luxury goods—had smaller budgets and couldn’t afford me once they signed on board.  Instead, I was often farmed out to some of the agency’s biggest clients representing industries I never imagined in a million years I would be promoting.   But with a big mortgage to pay and a partner changing careers, I saw no other choice, and would just suck it up everyday, doing it all for the money.

After several months, the dollar grind was becoming increasingly difficult to endure, especially on what had become a bi-monthly business torture trip to the suburbs of Dallas.  That’s where two of the firm’s most important clients were headquartered—a soda manufacturer and a potato chip maker.  A typical trip meant suffering through morning long meetings lead by pompous MBAs in charge of increasing “soda share of market.”  They insisted that I could only understand the brand through a show and tell of different soda brand “mood boards”—a fancy name for cutting out pictures from magazines and gluing them onto poster board.  I remembered doing the same thing for Valentine’s Day in elementary school.  As it turns out, the mood of root beer was shades of camel and brown, and lots of images of happy middle class African-American families ripped from the pages of Essence magazine.  Lemon-lime beverages, on the other hand, were evidently enjoyed only by white folks.

Visits to soda central were one thing.  But real evil lived down the suburban lane at the snack maker’s lair.  One morning, as I arrived for a special briefing from our world-famous chipmaker, a giant orange costumed feline mascot ambled by and waved.  Where was he going exactly?  I ducked into the dark conference room with attendees from the company’s various agencies—advertising, online, media buying, and public relations.  It was like a gathering of the Knights of the Marketing Roundtable.  Greg was the MBA in charge of the potato chip behemoth’s “health” initiatives—think intensity of Aaron Eckhart with the clueless wonder of Paul Rudd.  He was excitedly running through a PowerPoint presentation, peering over his rimless Lenscrafter frames, and whispering for dramatic affect while clicking to the next slide. 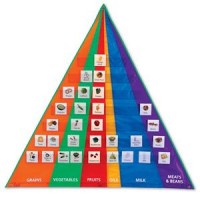 Flashing on the screen was a graphically enhanced version of the government’s new recommendations on nutrition.  Most of us grew up with the familiar “build from the bottom of the pyramid” approach—grains on the bottom, fruit and veggies stacked on top, followed by some milk and protein, with just a tiny bit of oils and sweets on the crown.  The just released updated government guidelines was an oddly psychedelic approach, dividing the pyramid lengthwise—slivers of the pyramid indicating the proper amount of all the same types of foods, with just a tiny, tiny, tiny slice for fish and nut oils.

“Ladies and gentleman, the goal of every person in the room is to help this company own the food pyramid,” Greg announced dramatically.

Triumphantly, he put down his clicker and sat down at the head of the table bathed in the light of the projector.  There was not a murmur from the crowd.  I glanced around the table but my cohorts were busy jotting down notes from the lecture.  Most senior agency executives are basically paid to tell clients what they want to hear, and then leave it up to—and blame—their junior team for failure.  But I have always prided myself on being an honest guy, and could not restrain myself.

Around the table traveled whispers of a possible mutiny.  Greg raised his eyebrows.

“Okay, perhaps own the whole thing is ambitious.  But right here, right now, we can own this part!”

Greg punched the clicker and the image on the screen zoomed in on the tiniest sliver of the pyramid—fish and nut oils.

“You’ve got to be kidding.  You make chips.  That pyramid means oil from eating things like salmon.  Not food fried in oil.”

Was everyone in the room crazy?  Surely someone else saw the dark comic nature of this meeting.  Instead, all eyes just stared at me—like I was the walking dead having just committed professional hari-kari.  Granted, I had been in public relations long enough to know how to stretch the truth—I certainly wasn’t a purist when it came to message delivery.  But this was taking it too far, becoming purposeful disinformation that could seriously cause health risks.  I tried to reason with everyone.

“Look, I think it’s okay to say to the American public, ‘if you snack, try our chips—they are made with healthy oils.”

“We have to dream big if we’re going to win this war,” he said.

“I’m sorry, what war are you talking about?” I asked.

“The battle for the millions of American snack lovers who want to feel good about their choices.  We can make them feel good.  We owe it to them.”

And at that point, a vision flashed through my head.  Greg was the missing cast member from the movie Thank You for Smoking, the satire of Washington lobbyists working on behalf of tobacco, alcohol and firearms.  He could be their food conglomerate buddy doing his best to confuse the minds of Americans about nutrition.  I couldn’t expect reinforcements from a room full of  lackeys just trying to keep their billable hours up and their heads down.  I shook my own head in dismay and surrendered, letting the meeting flow to its natural conclusion with the typical round of backslapping and discussion of “next steps.”

When the lights came back up, I raced from the room, and outside, nearly collided with the giant agent-orange costumed mascot.  For the first time, I noticed the sinister grin permanently sewn into his face.

On the grimy American Airlines MD-80 flight back to New York, I slumped down in my non-reclining exit row seat.  I felt deflated, defeated and trapped.  I couldn’t see anyway out of this job—I needed the money too badly.  Is this what being a grown-up felt like?  How did I allow myself to get so bogged down in obligations and burdens?  I wrapped the skuzzy fleece blanket around my neck and stared out the window, not sure how I could ever broach this subject with Chef.  He was depending on me, and I didn’t want to let him down, but I wasn’t sure he knew how bad things really were for me.

What Would Mary Do?

Episode 1—What Would Mary Do?

Coming Up: After Skyping with Afghanistan, Jon Paul ends up with some adopted Aunts.

Coming Up: Jon Paul ponders the consequences of early exposure to his father's complete Playboy collection.