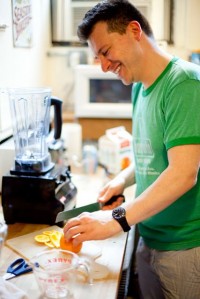 Previously on Service Entrance: Juan Pablo—an economist-turned-personal chef—lands in the home of The Mrs., a plastic surgery addicted character crazier than any Real Housewife of NYC. CLICK HERE to read Part 1.

Less than a week after meeting Amy, the “household crisis manager” who arranged a job interview with The Mrs., I walked down the block to the diva’s enormous brownstone on the Upper East Side—a neighborhood I had come to equate with fussy clients.  I learned quickly that the area where the client lived was a good predictor of their quirky behaviors and requirements. Before I even knocked, the castle-like doors parted and Frank, a beefy security guard and former NYPD officer, greeted me.  He had been monitoring my approach via a network of security cameras.  I was escorted into an entryway with gleaming white marble floors, an imposing staircase and, everywhere I looked, pumpkins.  Big, real pumpkins.  And cobwebs.  And tombstones.  And bats.  It looked like the set of a Halloween-themed Broadway production.  Frank could sense my surprise. 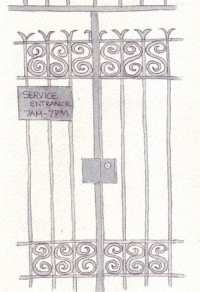 “Every holiday, The Mrs. decorates the house for the twins,” he said, referring to the couple’s much-photographed five year-old daughters.

“But Halloween is six weeks away,” I said with a shudder, “it’s not even October yet.” The whole house had a creepy, campy mausoleum feel to it.

“The Decorator adds another item every day.  The Mrs. wants the twins to have something to look forward to every morning,” Frank explained.

He pointed to a life-like spider hanging from the chandelier, and I shook my head slowly.  Gringo Halloween never quite caught on in Mexico.  I much prefer our Dia de los Muertos celebration where we cook delicious foods to honor our ancestors.  Imagine that—a Mexican holiday with food involved.  It’s little wonder I find our version of the fall holiday so much more enticing.

Frank took me into a library and motioned for me to sit.

“You just missed the Costume Designer. He makes outfits for everyone.  All the staff has to dress up.  This year’s theme is Wizard of Oz.  My security guys are going to be Flying Monkeys.  The twins will both be Dorothy.  And The Mrs. is Glinda,” Frank said.

I had a feeling that The Mrs. had been horribly miscast.  And what was left for me?  The Mayor of Munchkin land?

“When Halloween is over, we start in on Thanksgiving decorations immediately.  Hopefully you’ll still be around for that.  The last chef lasted less than a month.  The Mrs. will be with you soon.  She’s a little crazy.  You’ll see.”

Like the maids who quite literally know everyone’s dirty laundry, you can always count on the security staff to spill the beans.

I settled into a giant studded leather sofa and glanced around the study.  It had floor-to-ceiling bookshelves, Persian rugs and an antique writing desk that looked like it hadn’t been used since Lincoln’s time.  I cringed when I came to the prominently displayed framed photos of The Mrs. and her husband with George and Laura Bush.  It always surprises me that Republicans choose to live in such a liberal city like New York.  With all of the imported household staff, I wondered if The Mrs. was as anti-immigration as her conservative cohorts.  I made a silent vow to cook their meals, take their money, and try to keep my politics to myself.

After sitting alone for almost an hour, a dark-skinned, skinny, 20-something boy with meticulously plucked eyebrows appeared in a tight t-shirt.

“The Mrs. wants you in the Garden Room.  I’m Alex.  Follow me, papi,” he said with a bit of a lisp and a Puerto Rican accent.

I followed Alex back out through the pumpkin patch, where he paused at the marble staircase.

Gay houseboys, in addition to being even bigger gossips than maids and security guards, tend to stir up a heap of trouble.  I didn’t want there to be any funny business between us.

“Why do you need to make sure?” I asked.

“Oh, The Mrs. allows only gays on the third floor near her bedroom.  Says it makes her feel safer.  But it makes more work for me because the house manager says he’s straight.  Like I believe that.  You won’t either when you meet him,” he said with a roll of the eyes.

“Well, lucky for you, I can serve The Mrs. her breakfast in bed,” I said.

Alex winked, and we headed down the staircase, through a dark passageway and into a glass-enclosed solarium with a view back to a kitchen that was three times the size of my apartment.  In the garden room, there was a delicate little table with tiny white chairs, for the twins, I assumed, and a larger couch along one wall with aggressive green wallpaper.  When I went to sit on the adult-sized settee, Alex stopped me by holding up a hand.

“You sit in the little chair.  Only The Mrs. sits on the couch,” he said.

I wasn’t exactly sure how I would keep from falling over on what looked like an expensive chair-ette on loan from the Museum of Modern Art.  But I had no choice.  While managing a delicate balancing act, I had a direct view into the kitchen, which looked like the galley of Noah’s Ark.  There were two stoves, two ovens, two refrigerators, two wine coolers, two espresso machines, and two dishwashers—despite the latter, two men stood hand cleaning pots, pans and plates while four maids waited to dry.  Supervising them was a pack of non-stop barking Chihuahuas—at least five on the floor and one on the counter next to an overweight, drowsy cat.

“Oh, hello.  I’m Tom.  The House Manager.  The Mrs. will be with you shortly,” he said nervously, in a vaguely British accent.  I could see Alex’s point.

In general, House Managers and Chefs don’t get along.  If you’ve ever seen Gosford Park or watched the BBC series Upstairs, Downstairs, then you understand that there’s built-in friction with the household staff of the wealthy.  House Managers like to think they are the bosses of everyone.  Chefs believe they report only to the Mistress.  Conflict ensues.

Tom placed a crystal goblet and bottle of water on the small table in front of the couch.  How nice.  I was thirsty.  Maybe Tom and I would break tradition and have a friendly relationship.  I reached out for the water and smiled.  He shot me a look of utter contempt and shook his head no.  Without any other explanation or pleasantries, he left.

Just as I was imagining what incredibly important social obligation must be keeping The Mrs. from our appointment, she appeared—glistening and dewy in a tight-fitting Juicy Couture tracksuit.

On the next Service Entrance: Juan Pablo gets a taste for The Mrs. strange logic—coming face to face with an unexpected beast.

This fragrant dish became a winner with The Mrs. and her semi-vegetarian kids. Semi-vegetarian? Read next week’s episode to find out.

Pat dry tofu slices with paper towels, transfer to a bowl and gently toss with Worcestershire sauce. Set aside to let marinate briefly while making the ceviche base.  For the ceviche base, toss together tomatoes, lime juice, jalapeño, salt, onions, bell peppers, ginger, garlic, 1/2 the amount of cilantro and coconut milk in a large bowl. Add tofu and toss again gently. Cover and let marinate in refrigerator for about 2 hours, or overnight.  Serve in small bowls or ceviche cups with a few saltine crackers if desired.  Garnish with remaining fresh chopped cilantro.   Serves 5 or 6 as an appetizer.