#13 Because the restaurant at the casino made famous by Priscilla Queen of the Desert is called The Juicy Rump. No kidding. 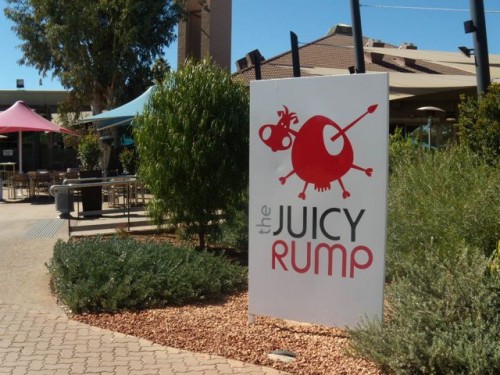 In my imagination heavily influenced by the movie Priscilla Queen of the Desert, Alice Springs was going to be a town inundated with kitsch from the camp classic.  You know, souvenir shops selling t-shirts emblazoned with quips from the film like, “You can make a fine living in a pair of heels.”  Alas, it was not to be—for the most part it’s like the movie passed the town by (or else the citizens didn’t devolve into mass market commercialism like we would in the States).

And while I may be reading into things, I have to believe that the name of the restaurant at the casino where the trio of drag queens performed their outrageous numbers wasn’t an accident.  The Juicy Rump was filled with delicious looking Aussie lads, albeit most of them straight.  But that didn’t stop me from pulling up a stool and watching some more rugby and Aussie rules football.  I just wish the cocktail I was sipping had been named, “A Cock on a Frock on a Rock.”