#16 Because the youngest, shirtless and sexiest lads in Australia lay out in Darwin’s new harbor beach esplanade—giving the Northern Territory a dose of Sydney chic. 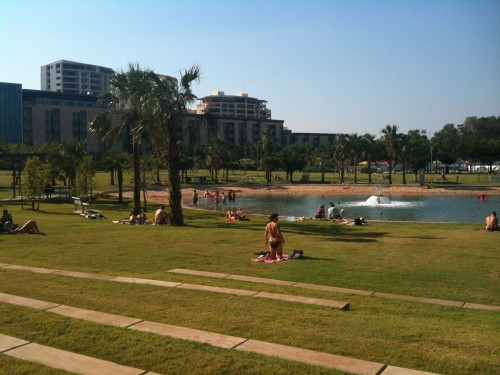 As a gateway to Down Under’s outback, remote Darwin in Australia’s north welcomes hundred of thousands of travelers a year.  But with a killer jellyfish scourge, the lovely beaches have been off limits—everyone had to make due with standing longingly on the sand while watching dramatic sunsets.  Until now.

That Aussie ingenuity developed a solution that’s a lovely combination city park and urban water oasis, surrounded by chic restaurants and bars.  A protective wall keeps the danger out, and the fun all around.  Darwin boasts the youngest median age of any city in Australia—around 30—so the park boasts some of the best eye-candy around.  My tip: skip the overheated Mindil Beach Market and hang out here to get a true taste of the locals.

Like one of my all-time favorite films Priscilla, Queen of the Desert, the ultimate destination on my last trip Down Under was Uluru (Ayers Rock) in the country’s “Red Centre.” Granted, I didn’t take a bus or wear a silver lamé dress (damn), but I did sing lots of disco songs and chose a circuitous route. I found the majesty of Uluru spell-binding—one of those places that more than lives up to expectations. No wonder it’s a finalist to be one of the New7Wonders of Nature, an online poll that will announce winners on 11.11.11. Join me in voting for Uluru/Ayers Rock, by visiting www.n7w.com/uluru. Who knows, maybe I’ll end up adding Uluru to my sleeve.