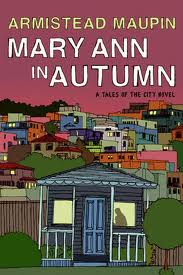 In addition to Mary Tyler Moore, another triple named gal, Mary Ann Singleton, has eased me through some of life’s sharpest moments.  Driving in a U-Haul to Alphabet City nearly 15 years ago, I kept awake listening to my friend Martin read aloud the latest antics of the fallible heroine of Armistead Maupin’s Tales of the City series.  Indelibly inked in my imagination as the actress Laura Linney who played in her in the PBS mini-series, the girl is back in the 8th book in the collection, Mary Ann in Autumn.  The books have always been a cleverly composed and punchy commentary on pop-culture, vaguely hiding Maupin’s own worldview and life experiences, with hilariously constructed plots.  This one is no different—minus the hysteria.  There aren’t many laughs here.  As the title would suggest, Mary Ann’s light is dimming at the age of 57 which leaves her feeling a little blue, perhaps a reflection of Maupin’s own maudlin mood.

A personal tragedy has lead Mary Ann to escape her New York life—where she fled in earlier episodes—to return to San Francisco to seek comfort from lovable characters she had left behind, including best gay friend Michael and the indomitable Mrs. Madrigal, played to TV perfection by Olympia Dukakis.  Like Mary Ann, Michael has aged and now has a much younger husband, giving Maupin the opportunity to explore monogamy in gay relationships, along with a titillating discussion of male vs. female sexual desires.  A supporting cast of characters includes the transgender Jake who provides a real insight into the psyche of gender identity issues that Maupin didn’t necessarily explore earlier with Mrs. Madrigal.

But really, the story here is all for Mary Ann, as one would expect from the book’s opening dedication to Laura Linney.  I couldn’t help  imagining that captivating actress reading some of the lines here—as if Maupin was channeling her current character on Showtime’s The Big C (a program I’m wildly ambivalent about).   Typical of Mary Ann’s sorry state of mind:

“It all goes so fast, she thought.  We dole out our lives in dinner parties and plane flights, and it’s over before we know it.  We lose everyone we love, if they don’t lose us first, and every single thing we do is intended to distract us from that reality.”

Sounds like a Sondheim lyric if you ask me—and something Chef said to me on second date, sweet, right?  Only Laura Linney could give this thought a lift that would keep me from hitting the bottle to drown my sorrows.

Maupin has been a big influence in my own writing.  His clever integration of historical references and pop culture items will no doubt make the books an important cultural historical relic.  I took cues from Maupin in writing Alphabet City trying to capture the feel of a specific time period—the late ‘90s—with stories about early gay dating on the Internet—hearing the modem connect with static, for example.  A line that always earned laughs from gay boys when I was on book tour.  Here, Maupin hones his craft using Facebook as an important plot point.  Similarly, Mormons and their Prop 8 fight in California are crucial to the development of a few other characters.

Honestly, I was excited but nervous when I first learned that the next book in the Tales of the City series was forthcoming.  Similar feelings to a class reunion, I suppose.  While you might look forward to catching up with the people you remember liking—meet their new spouses and lovers—it’s always the signs of aging that are  worrisome.  Maybe it’s that you don’t want to see those reflections in yourself.  On the whole, I’m glad I attended (read) the Mary Ann in Autumn reunion.

But it didn’t perk me up.  Instead, it left me feeling, well, maudlin.  And if that’s how Maupin is feeling, then by all means, the next time I see him, I want to give him a hug.  Because after autumn, it gets a little worse in winter, but then there’s spring.  As the phrase of the moment says, it gets better.